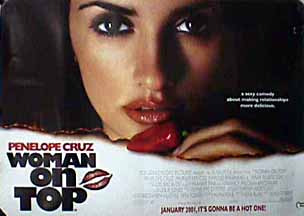 My wife says this should be titled A Woman’s Destiny – don’t be put off by the title which is clearly aimed at selling it. It is a charming and unusual film in which the performance of Penelope Cruz once again surprises us. With a female directing and writing team from Venezuela and Brazil its also not surprising to see some South American magical realism finding its way into the story. Harold Perrineau as the sexually interesting foil to Cruz steals scene after scene and brings the film to life.

There are a surprising number of harsh reviews of this wonderful film. I think the hard nosed critics forget that it is a fantasy and a fable. Sometimes it’s better not to be too analytical. Sure, this is a piece of fluff. But it’s very high quality, attractive fluff. Penelope Cruz makes Julia Roberts look like an untalented anorexic. The film brims with wonderful Brazilian music. And there is a tremendous cast of supporting actors and oddballs. It’s a happy, warm film. Not a bad thing in these difficult times!

This is a fun film. Firstly it is sexy without being vulgar, proving that comedy without vulgarity is feasible. Secondly it is easy on the eye (Penelope) and the ears (Latin Rhythms). Thirdly, it is a fairy tale, both in content and format and hence totally unbelievable. And like all fairy tales, this one too has a moral…which is for the viewers to discover. The best thing about the movie it its old world charm, which is so endearing. Though eminently forgettable once you are out of the cinema hall, while inside, it is worth every minute. Recommended to take along someone you love.